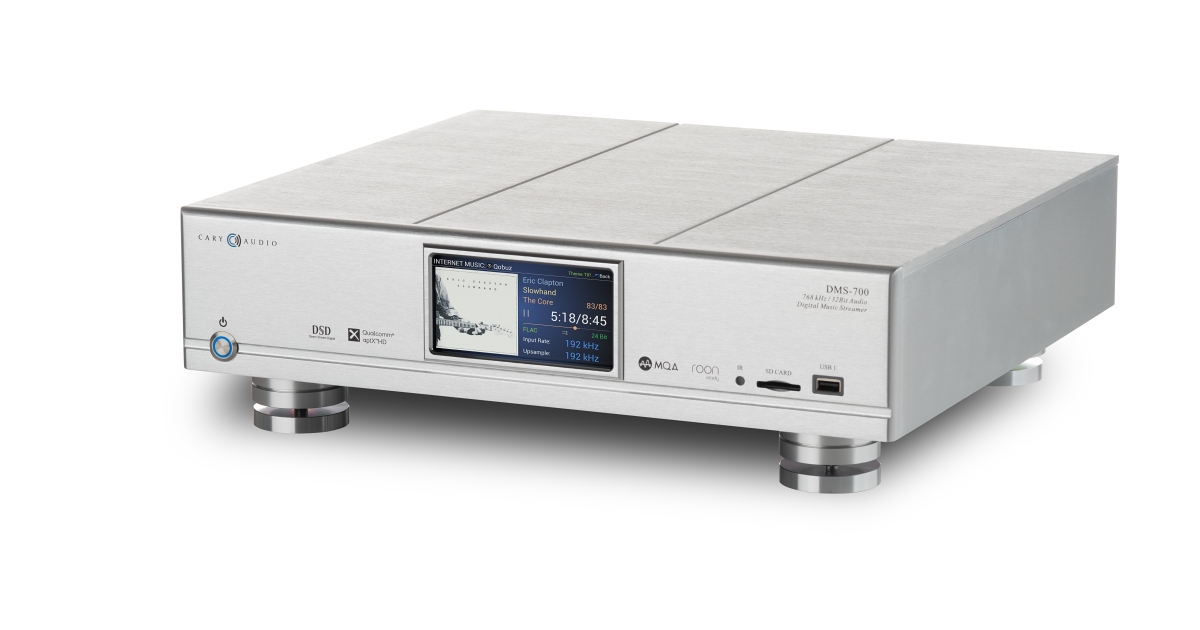 Hi-Fi+ is an established print magazine edited in the UK by Alan Sircom. We have sent the review sample to Mr. Eric Neff and were eager to hear what he has to say about our new network audio player in issue 198. And DMS-700 cut the mustard! Very positive review which you can read in its fullness on Hi-Fi+ website or below or alternatively download a PDF version.

The last few years have seen the rise of a new class of audio product, the network streamer. A device that will access your streaming audio account without the need for a PC or Mac and serve up tunes via their own IOS or Android app. The goal is to mitigate any PC related hash that can interfere with your sonic journey. These units can also have a DAC on board, or they can just serve the files up to your system DAC for processing to your preamp and amp. One of the challenges for these units is that by being the new kid on the block they are subject to the fast-moving changes in the audio world. New streaming services become available. DAC chips evolve. Services like Roon and processes like MQA shake up the landscape every year or two. As an audiophile you want to make sure you are not left behind. Who should you look to for great quality today and flexibility tomorrow?

One company to have high on your list is Cary Audio of Cary, North Carolina. Founded in 1989, Cary has been producing high quality audio gear from the beginning. Originally focused on Tube equipment such as the iconic 805 Monoblock amplifiers it has also been producing solid state digital gear since the mid 1990’s. What is notable is that while Cary is certainly on the cutting edge of digital, the company is also masters of the analogue game. Cary knows how to design toward that elusive analogue sound so many seek even when playing through their digital gear. 1’s and 0’s made more real with that flesh on the bone sound many digital denizens cannot provide.

Cary has been working with streamers for many years now. It’s previous flagship, the DMS-600 has received many accolades yet like so many top audio firms they felt they could do better. So, bring out the clean sheet of paper and after much effort, Cary presents its new third-generation flagship streamer, the DMS-700. My first impression when the unit arrived was it resembled my flagship Denon AVR-X8500H home cinema receiver. On the front stenciled on the case were logos for DSD, Qualcomm APTx HD, MQA and Roon. This unit was offering up a state-of-the-art combination of technologies and partnerships allowing the up-to-date audiophile as many ways to access, render, and stream 16/44 and high-res files any way they chose to. Nice! You could have a home system that relied upon Wi-Fi or Bluetooth and the DMS-700 had the antennae to match! You could also plug directly to ethernet and hard wire your access. (Do not use the Wi-Fi antennae if you hard wire.) Also, as expected, it is software upgradeable. The unit I received was not yet Roon certified. Two days after arrival when I turned it on, I was notified of a software update that included full Roon certification. The update, handled through the app, was simple and flawless. And within a few minutes I was cooking with Roon at full power (Roon account required). Just the kind of upgradability you expect from a modern flagship digital audio device.

All the usual inputs are there including three USB, One SD Card, One Bluetooth, One AES/EBU, Two COAX and One Toslink. Plus, the aforementioned Ethernet port which allows for wired access to your favorite streaming services. Tidal is native with full MQA unfolding for MQA Master files. Qobuz and Spotify are also sign in ready along with vTuner Internet Radio. Access using the Streamer 2.0 app via IOS, or Android makes controlling the DMS-700 a simple thing. One small nit to pick is the app only offers a portrait mode functionality. Those of you using a keyboard case will have to wait for the landscape option in a future app release.

When a DAC is involved, the basic question seems to be what chip is being used? The DMS-700 uses the AK4499EQ flagship current driven switched resistor DAC chip from AKM. Cary chose it for its greater analogue sound than voltage driven Delta-Sigma chip designs. But as any experienced audiophile knows the chip is just the beginning. Cary takes full control of the chip by pairing it with an FPGA and full-on analogue circuit and massive power supplies to bring that signature Cary Audio sound to the fore. No off the shelf plug and play here. As Cary Audio describes it: ”As important as the DAC chips themselves are, it’s the designed pre and post DAC chip that gives our Cary Audio DMS products their famous signature sound.” I will concur that the sound is not digital. It is cool and precise with a sense of dimension that offers up a feeling of analogue without any slack. Timing is appropriate and lifelike.

One potential concern is the AKM chips themselves. After the fire at the AKM factory I asked Sales Manager Daryl Berk how they were set for supply. “We were lucky, he said.” “We had a significant supply in house and so we are not experiencing any delays or shortfalls with our production.” Good to know that it is full steam ahead for the DMS-700.

In an interview I conducted with Enno Vandermeer of Roon I asked him why he and his team developed their product. He said it was to remove the tyranny of choice when his friends could not decide on what song to listen to next. I chuckled remembering this as I connected the DMS-700 and logged into Roon, Tidal and Qobuz. Here I am with a state-of-the-art streamer connected to virtually unlimited music access. Now what? I was at the true square one of the tyranny of choice. Ha!

Starting with the letter A but not too close to the beginning I queued up Audioslave’s I am the Highway [2002 Epic – Interscope]. Any listening session with some Chris Cornell is a good one. This slow driving song features guitars with some great reverb. The file I selected through Roon came from Tidal and was a 16/44 FLAC. My initial impression was it had a great sound. Full of great depth and space. But wait, the DMS-700 is also a DAC and an incredible upscaling DAC at that.

Cary Audio has spent years working on taking the chunkiness (Technical term!) out of upsampling via their Trubit DSD & PCM upscaling and PCM to DSD conversion process. A 16/44 PCM file can be upsampled to 32/384 or DSD 256! (The DMS-700 can process DSD 512 files as well) What I enjoyed was using the remote to go step by step through ten levels of upsampling with PCM files. You can also set a particular sampling rate, and everything will be set to that rate until changed. PCM conversion to DSD is made simple should DSD be your choice. What I found interesting was that different files sounded better at different sampling rates. Just cranking things up to DSD 256 was not the universal nirvana. Playing a PCM file in FLAC at a native 16/44 could be best at 24/176.4. It was fun to experiment.

But what about your large personal collection? The DMS-700 can render via DLNA/UPnP using JRiver or several other external software-based devices from their PC or Mac’s rather than use the Cary app. You can also plug in your NAS, hard drive or even an SD card and the Cary will sort your files using the app to allow file choice and playlist building. However, you choose to access a song either locally or remotely from a service it will all flow in a very natural way through the DMS-700 and once accessed you can apply whatever DAC settings to it that you choose. This is control and flexibility to a high standard.

Bluetooth connectivity was also easy. Press Bluetooth on the remote control and the DMS-700 went into Bluetooth search mode. I had my iPhone 12 Pro Max connected in seconds. I queued up Pink Floyd’s Dogs from their Animalsalbum [1977 Harvest, EMI] and sent a native 24/48 signal to the DAC. Seventeen minutes of fun later it was obvious the Cary was right at home with Bluetooth as one of its many sources. Sonics were full and gave no hint of their origins from my iPhone. There is also a Bluetooth send function to output to your wireless headphones. My VModa Crossfades quickly became best friends with the DMS-700.

Queuing up some Leonard Cohen ‘Almost like the Blues’ [Popular Problems, 2014 Columbia] via Roon I was rewarded with Leonard’s deep gravelly voice being offered up from between the bass guitar and piano. I upscaled the native 16/44 FLAC to 24/176.4 via Trubit and the fit was wonderful. The sense of room space was very lifelike. The presentation had depth and positioning that suggested an intimate club atmosphere. By the way, remotes can be somewhat hit or miss. The DMS-700 remote gives easy control of a complex device. The remote and the OS work cleanly and allow for you to not have to focus on the remote, just control the music. I appreciate the work that went into this by the Cary Audio engineering team.

Moving on The Police’s third album, Zenyatta Mondatta [1980 A&M] and on ‘Driven to Tears’ I was struck by the exceptional clarity of Andy Summers chime like guitar chord progressions. There was nothing harsh. Clean and precise they floated between Sting’s roving bass line and the ultra-precise drum work of Stewart Copeland. Continuing to ‘Shadows in the Rain’ the DMS-700 conveyed the depth and space of this song’s lesser played version with great definition. The front and centre bass line had a lifelike timbre that showcased fingers on strings in an almost visual way. Speaking of bass lines Lou Reed’s Transformer album’s [1972 RCA] ‘Walk on the Wild Side’ in a 24/96 file without upscaling via SD Card was superb. The rasp of the upright bass and the incredible realism of the backup singers was spot on. Lou’s voice was front and centre with terrific soul and clarity. The DMS-700 delivers even when it is not asked to do more than pass on a direct file read. Regardless of how a file was delivered to the DMS-700 it was treated with care and delivered to your ears as you would want.

Cary’s DMS-700 is less than half the price of many streaming devices currently available, but it is a fully featured flagship unit. The good news is the Cary Audio DMS-700 delivers. Not just in the expected sound quality, which is exceptional, but in its execution of its tasks. This is a very well thought out unit. Software works both in process as well as in elegant function. It is easy to get around despite a diverse selection of tasks to address. Upgrades will keep it relevant for years and are made in a direct and simple way by an easy-to-use app. The front screen is easy to read from a distance, the remote is simple to use, I can place it anywhere in the room because I can connect via WIFI or Ethernet and, by the way it looks great on the rack. What is not to like? Cary Audio sells through a network of brick-and-mortar dealers and via direct if you are not close to one. They have the expertise in analogue to pass that DNA through to their digital children. This device is the best of both worlds. An audition is suggested with one caveat; Make sure you have funds in your bank account before you bring it home. I doubt you will return it.