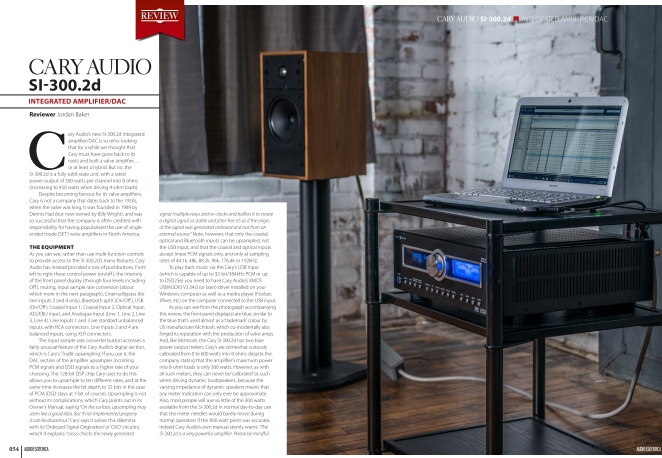 Download this review as a PDF File or read the excerpts below:

“Cary Audio’s new SI-300.2d Integrated amplifier/DAC is so retro-looking that for a while we thought that Cary must have gone back to its roots and built a valve amplifier… or at least a hybrid. But no, the SI-300.2d is a fully solid-state unit, with a rated power output of 300 watts per channel into 8 ohms (increasing to 450 watts when driving 4-ohm loads).
Despite becoming famous for its valve amplifiers, Cary is not a company that dates back to the 1950s, when the valve was king. It was founded in 1989 by Dennis Had (but now owned by Billy Wright), and was so successful that the company is often credited with responsibility for having popularised the use of single-ended triode (SET) valve amplifiers in North America.”
…
“It was immediately obvious at the outset that we would not be needing any more power than the SI-300.2d was easily able to deliver. It simply belted out the watts, and despite the fact that the power output meters were dancing away merrily towards the iddle
of the dials we never once feared for our loudspeakers because the sound was so clear and clean, and without distortion”.
…
“But it should never be the meters that you watch for signs that an amplifier might be running out of power: you should be using your
ears to listen for any signs of distortion and/or clipping. And no matter how hard we drove the SI-300.2d we just didn’t hear any of either. While experimenting with this, we also noted that the sonic character of the Cary Audio SI-300.2d remained constant across all power levels, which is an ideal performance characteristic, and also that character was a true representation of whatever we played: the SI-300.2d did not add unwanted tonal warmth to the sound or smooth off any rough edges. Nor did it exaggerate any part of the audio band: the level of the bass was in perfect balance with the midrange, which was in turn in perfect balance with the treble. Lovely!”
…
CONCLUSION
“Cary Audio’s SI-300.2d looks fabulous, sounds great, is very well designed, and is built to an extremely high standard — and that build, mind you, is entirely in the USA. It’s also extremely high-powered and able to be controlled via its own remote or its own app and it will play pretty much anything you can throw at it — wired or wirelessly. Full marks, Mr Wright!”