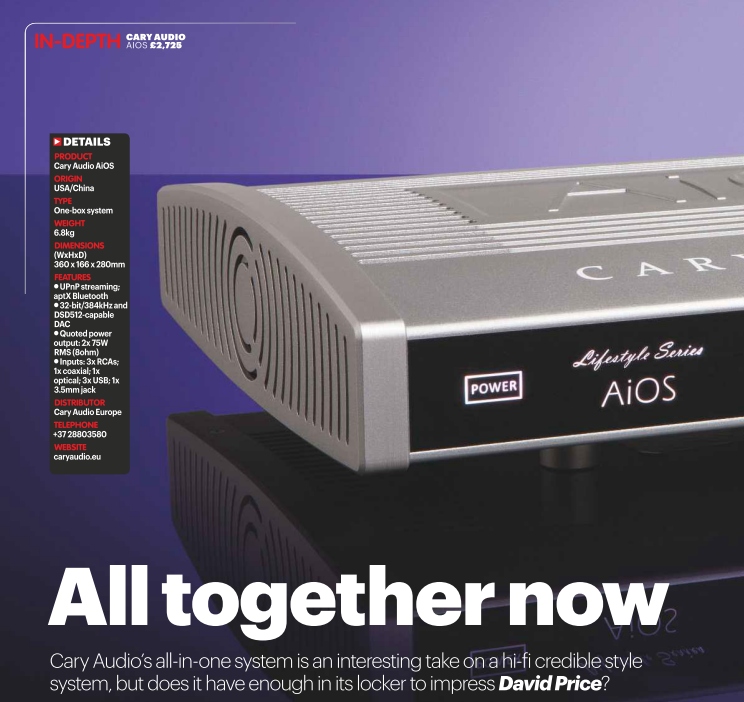 Ever dreamed of a compact system to stream everything audio from TIDAL or your local network? Cary Audio AiOS is here to fulfill your dreams and more: All-in-One-System, which is integrated amp, high resolution DAC and streamer united in one box.

Cary Audio’s all-in-one system is an interesting take on a hi-fi credible style system, but does it have enough in its locker to win us over? Asks David Price in his review published in Hi-Fi Choice Magazine issue 437. This review is online on HFC website in an abridged version. You can also download the full review PDF here.

We add a few excerpts here though:

Billy Wright, the President of Cary Audio, says that he hopes both
audiophiles and young people will look at the AiOS with interest. “By reaching the younger generation of music lovers, we want to introduce them to the appeal of higher performance playback.”
It’s certainly a laudable aim, as is offering older people downsizing from large separates systems a respectable route to something smaller.
[…] A Look closely and it is clear the company has made an effort to lift the AiOS into proper hi-fi territory. The power amplifier section boasts 75W RMS per channel into 8ohm – and,
unexpectedly for something so petite, it doesn’t use Class D power modules, but Class AB MOSFETs. There’s a welter of facilities on top of this, centred around the AKM4490EQ, the same DAC chip used in its reference DMS-500 network player. As an aside, I have never heard a poor-sounding DAC or CD player with this fitted. An in-house designed streaming platform is used. “We don’t believe in using off-the-shelf solutions by third-party vendors,” says Wright. “We have the engineering prowess to do so whereas many competitors don’t, hence why they use third party platforms…”

Sound quality
I may have some reservations about the ergonomics of the AiOS, but there is nothing to complain about, in the way it plays music. This is an extremely nice sounding one-box system, with an audio quality that totally belies its small size and modest price. It delivers a big, bold and vibrant sound, yet is a long way from being uncouth. Indeed, it’s surprisingly polished, subtle and detailed in the way it plays even plain vanilla Red Book CD from a disc transport. Even
the Bluetooth sounds great.
Whatever input you choose, there is power, musicality and poise – plus a pleasingly fulsome tonal balance, too. It’s quite easy to confuse this for a full-sized hi-fi separate, so good is it.
For example, Wings’ London Town is a silky smooth recording from the late seventies, done at Abbey Road under the watchful eye of George Martin. On a poor system it can sound flat and lacklustre, because the recording itself is so butter-smooth. Via the Cary system, however, the result is vivid yet fulsome. The most striking thing is the vast soundstage; it’s far wider left to right than I would expect from such a device, and not only that, images are located with surprising precision within the recorded acoustic. True, depth perspective isn’t quite up with serious high end hi-fi,
but the expansive soundstaging more than compensates and the result is a broad, room-filling performance that beams effortlessly out of the loudspeakers.
[…]

Master of rhythm
All good so far, but this system’s real talent is its handling of rhythms, and the AiOS delivers a really bouncy and engaging sound.
[…] 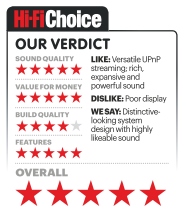 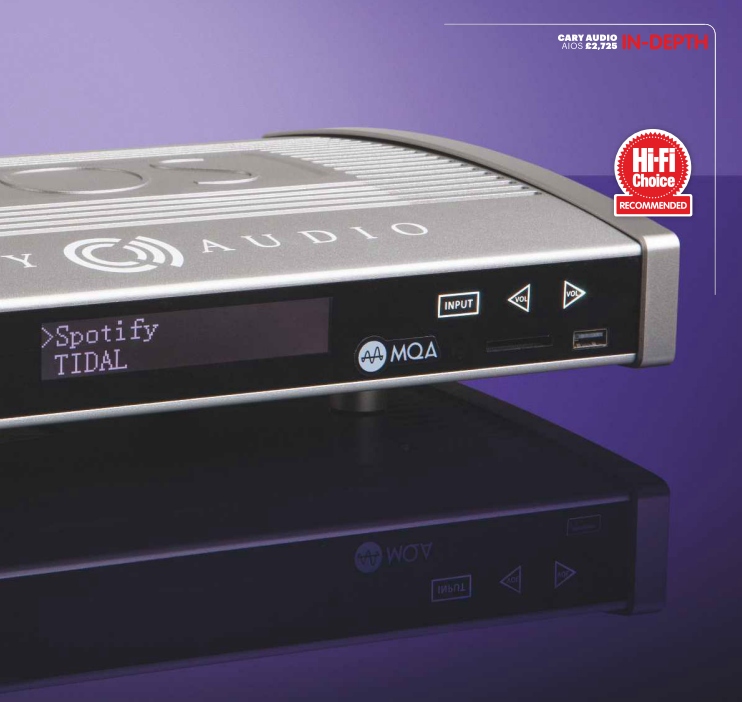