This is Powerhouse: Cary SA-500.1 ES reviewed in The Absolute Sound 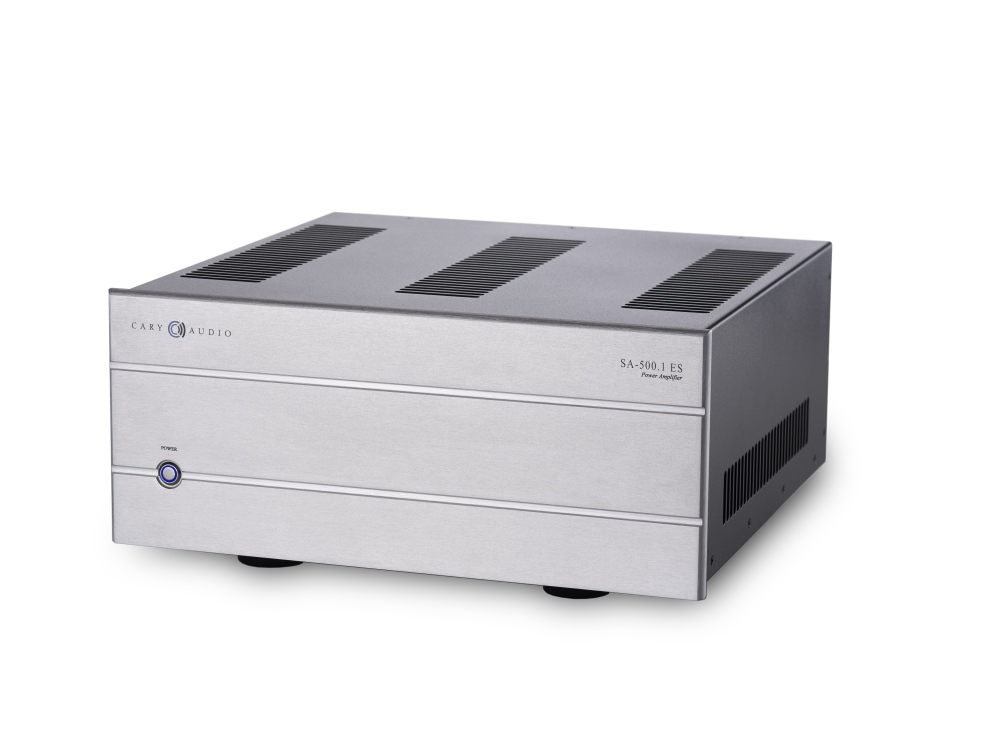 Kirk Midtskog is no stranger to crossing from tube to solid-state realm and back. Is it really possible to retain a signature Cary Audio tube sound in a powerful solid state amp?
Well, looks like Cary Audio can do this, but within certain limits. Read on or visit The Absolute Sound website for browsing this review in full.
***
The first brand-new piece of specialty audio gear I bought was a Cary SLM-70 tube power amplifier. It improved on the modified Dynaco Mk III it replaced in every way—better frequency extension, bass control, resolution of details, and soundstaging. It also had that lovely lower midrange lushness and musicality that tubes usually have galore. I upgraded to various tube preamps and power amps for about twenty years—some of them from Cary—with an occasional foray into solid-state along the way. (One of my tube-enthusiast acquaintances called my purchase of a solid-state preamp and power amp combo some time ago, “Going to the dark side.”)

The SA-500.1 ES mono amplifier under review here and its stereo version (200.2) little brother represent the latest in a line of 500-series solid-state power amplifiers originating from early 2011. So, even though Cary’s roots are in tubes, it has considerable experience with solid-state amplification. The design brief of the SA-500.1 ES team was to offer a powerful, reliable, musically enjoyable amplifier at a reasonable price. Marshaling 500 watts into eight ohms (doubling into four), employing a modular design for ease of manufacturing, and voiced with a hint of Cary’s renowned beautiful tube sound, the SA-500.1 delivers on those goals admirably.

Technology
The input stage is based on an op-amp. Very short signal path circuit board traces, an isolated power supply, and a ground plane around delicate components are all employed to reduce distortion. Cary focused on the power supply because, according to the company, “the power supply can contribute up to almost half of the sonic signature of an amplifier.” It beefed up the power plant over previous 500 models by using a custom 850VA toroidal transformer and greater than 98,000uF of capacitance per channel. The reservoir capacitors are placed right on the board because Cary found it made the amplifier sound better. The amp also uses more lower-value capacitors instead of fewer higher-value ones to reduce “equivalent series resistance and diminished high frequency performance.”

Cary improved component and assembly consistency by arranging the circuitry on four easily replaceable fiberglass printed circuit boards. This approach also makes it easier to service the amp should an unlikely malfunction arise. For protection circuitry, the 500.1 uses a DC servo, and the output stage is thermally protected, but there are no voltage- or current-limiting measures, which Cary says “can adversely affect the sound under demanding drive conditions.” The protection circuit disconnects the speaker outputs through a simple high-current relay if a fault condition occurs. The 500.1’s casework quality and cosmetics are in keeping with its price. The amp presented no use issues during the audition period.

Listening
My overall impression of the 500.1 ES’ sound was one of “inviting musicality.” No matter what kind of music I played, my attention was always drawn to the “heart” of the performances—if you will—rather than to audiophile check boxes like resolution, soundstaging, transient snap, etc. Those criteria are, indeed, important—and the 500.1 is not lacking in any of those areas—but they didn’t become more important than the music itself. The 500.1 did not favor a particular type of music, either; it delivered the slam and excitement of hard rock just as well as the nuance and intimacy of classical chamber music. The music had PRaT (pacing rhythm and timing), as the British like to say, and this, coupled with the amp’s generally free-flowing sound, contributed to lovely musical experiences. “My Ship Isn’t Pretty” by the Norwegian folk duo Kings of Convenience [Declaration of Independence, Virgin] was almost achingly beautiful. My second impression was one of control and the attendant sense of ease that results from clean, ample power output. The amplifier never sounded strained or changed its pleasing baseline character during demanding passages. Taken together, these qualities of unfailing musical interest and commanding ease make the 500.1 easy to like.

Even though part of the design goal was to retain some of Cary’s well-known tube sound in a solid-state amplifier, Cary did not ladle on the classic tube sauce heavily enough to dominate the amp’s sonic flavor. It does not have an overt upper-bass emphasis, a loose mid-to-lower bass region, or a soft top end. The 500.1 had just a pleasant hint of warmth and sweetness and most definitely had no signs of poor grip and definition in the bottom octaves. On the contrary, the 500.1 had better-than-expected bass control and clarity. The upper frequency range was well extended but with a lighter touch rather than a “ruthless truth” approach. The lower midrange was indeed a bit warm and inviting à la tubes, but only just enough to readily bring out music’s natural underlying appeal. Again, not an overt classic tube-sound dousing. These voicing choices will serve many listeners well, especially those with slightly harsh or aggressive-sounding systems. I never had the impression that the amp was excessively shading the overall sound, but it does hew to the warmer side of neutral while still delivering plenty of overall resolution and dynamic snap. 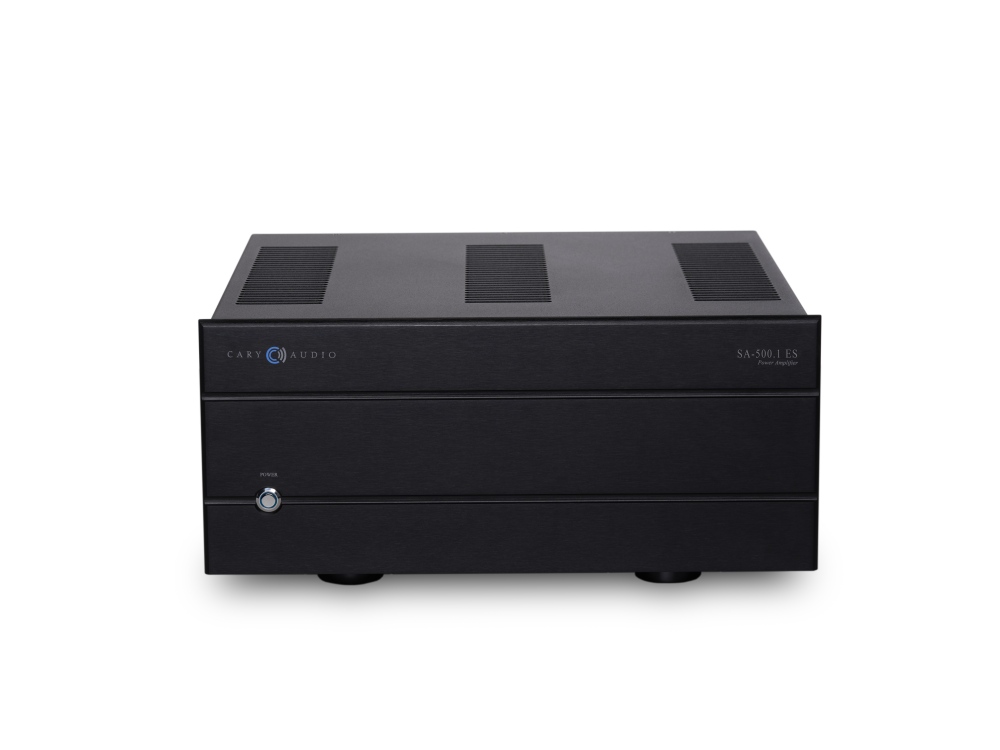 Soundstaging was quite good, particularly from side to side. The 500.1 seems to follow a pattern with solid-state amplifiers when it comes to an expansive soundstage—it helps to go monoblock. There was no center-fill vagueness or oddly placed images in the soundfield. In other words, if the recording had good lateral distribution, the 500.1 followed it. Overall soundstage depth was good but not quite as well rendered as width. Delineation of the front-to-back continuum was also good, but, again, not in keeping with the amp’s side-to-side sweep. Images within the larger soundscape were certainly clear enough to be considered commensurate with the amp’s price. They lacked the 3-D density that tubes and more expense solid-state amplifiers offer. At just under $10k a pair, the SA-500.1 ES’ soundstaging and imaging abilities were respectable, indeed.

Resolution of fine detail was well integrated with the amplifier’s tonal balance and rhythmic timing, and thus tended to a “greater whole” sort of presentation rather than one of crystalline clarity of minute details. I am not altogether sure if much higher overall resolution would necessarily fit with the 500.1’s mid-hall listening perspective or with its generally flowing, warm, and solid-foundation personality, for that matter. An attempt to increase its resolution could result in the amp’s sound becoming forced or unbalanced. For example, if there is an abundance of bow-on-string sounds (suggesting a relatively near listening position), but the general tone of those same instruments also have more rich, burnished qualities (indicative of a more distant listening position), the end result could be a mélange of inconsistent spatial cues. Massed orchestral string sections had enough information to suggest individual players but not to the extent I am used to with the other—admittedly more expensive— amplifiers I had on hand (covered below). Singers’ lip sounds were evident on closely miked recordings, but they were not out of proportion with the general presentation.

Comparisons
The Hegel H30 power amp puts out 350 watts (8 ohms) in stereo mode and 1100 watts as a bridged monoblock, weighs about 100 pounds, and retails for $15,000; so, it is 50% more expensive and less powerful in its stereo format (the way I listened) than the Cary SA-500.1 ES. In actual use, the two models exhibited comparable power-related behavior. They sounded equally at ease during demanding bass-laden and dynamically-charged passages, and their ability to impart a solid foundation to the music and their respective “control” of the speakers were similar. The Cary projected a marginally wider soundstage, but the Hegel rendered soundstage and image depth more readily than the Cary. Resolution of fine details, timbre, and “air” around the musicians were also clearer through the Hegel H30. The Cary sounded a bit warmer tonally, but the Hegel did not sound not at all “clinically neutral.” I bring the comparison forward, even though the price difference is unfair, only to provide some context to the Cary’s performance, which was certainly respectable given its price.

Conclusion
In its own right, the Cary SA-500.1 ES always sounded musically rewarding. The 500.1 offers commanding output power and a compelling musical groove that makes a subtle nod to the magic of tubes. If you value an overall sound whose welcoming tonal balance, mid-hall perspective, power stability, resolution, and rhythmic drive all integrate into a consistent, musically valid whole, the 500.1 just might be your go-to amplifier.