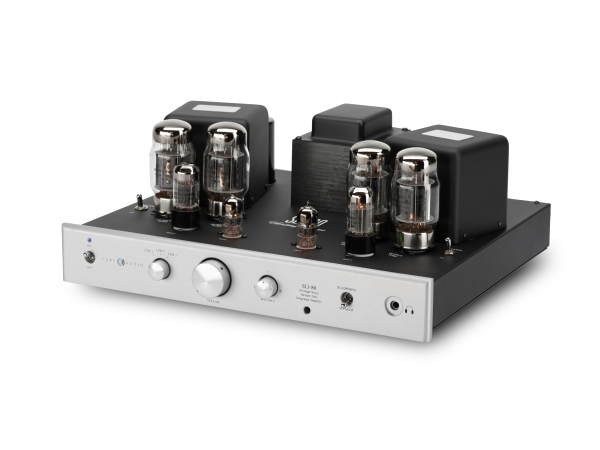 True to the Heritage: Ken Micallef gets to know our SLI-80 integrated amp now in Heritage Series incarnation.
What’s the difference between old style SLI-80 and current state of affairs? To make sound snappier and more dynamic we moved from tube to solid state rectification. Did it work? Read on…

To read full article purchase or go to Stereophile’s website. Down below we will quote some of it:

“The primary change with the SLI-80HS was to move from vacuum tube rectification to solid-state rectification,” Cary Audio President Billy Wright told me in an email. “Solid-state rectification adds excellent pace and dynamics to the music. And there were internal upgrades related to wiring, resistors, caps, etc., that continue to improve the quality of sound and performance, and cosmetic changes made to the faceplate to bring the look more into line with our other, newer products. It is an effort to continue to add consistency to the product line and improve branding.”

The SLI-80HS integrated amp uses two KT88 tetrode tubes per channel in a fixed-bias, push-pull, class-AB architecture. Assuming an 8 ohm load, the SLI-80HS is specified as generating 40Wpc in triode mode or 80Wpc in Ultralinear mode; that selection is made by toggling a pair of small switches on the amplifier’s top plate. In front of the four KT88 tubes are two 6922 (input buffer/preamplifier) tubes and two 6SN7 (pre-driver/phase inverter) tubes. Behind the tubes stand the output transformers—mounted at an angle in the manner of earlier Cary amps and wound to their specifications by a US supplier—separated by the power transformer. Point-to-point wiring is employed throughout the SLI-80HS, as are top-flight parts, including German-made Mundorf coupling capacitors, United Chemi-Con electrolytic capacitors, Dale resistors, Eaton and C&K switches, and a Japanese-made Alps motorized volume control. Should you care to upgrade the stock SLI-80HS when ordering, a dropdown menu on Cary’s website offers Hexfred rectifiers, Jensen (or higher-grade Mundorf) capacitors, WBT speaker binding posts, and a tube cage. 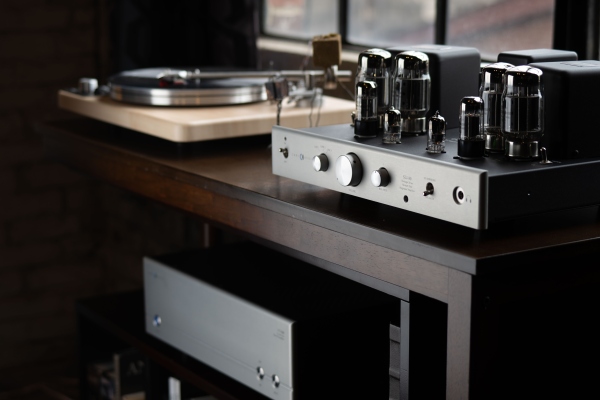 The handsome, steel-encased Cary measures 17″ wide by 7″ high by 16″ deep—the height includes the amp’s four rubber-composite feet—and weighs a manageable 42lb. The SLI-80HS is available with its front panel and knobs finished in either black or silver; also available is a choice of wooden side panels finished to match Klipsch’s Heritage Series loudspeakers (which ties into the Cary’s HS branding.

while spinning jazz vocalist Cécile McLorin Salvant’s live album Dreams and Daggers (3 LPs, Mack Avenue Records MAC1120LP). The McLorin Salvant set is free of studio trickery or any overt production aesthetic, and thus sounds practically flat in terms of frequency response, if a mite veiled. The SLI-80HS gave me a front-row seat to McLorin Salvant’s superior vocal artistry and her quartet’s sophisticated and swinging flow.

Through the SLI-80HS, the 1989 Japanese reissue of the Beatles’ Magical Mystery Tour (LP, EMI/Apple Records TOCP-8514) sounded small. The superior 1971 German reissue (LP, Apple Records HôRZU SHZE 327) was better fleshed out but still thin overall by contemporary standards. The Cary also refused to gussy up the rather shallow production of various mid-’60s Atlantic Records by Carmen McRae. And an electronic record I’ve loved for its lush electric bass and dreamy synthesizer, Air’s Premiers Symptômes (Parlophone RP1 47245), was exposed for its obvious digital lineage. The Cary told the truth, and sometimes the truth hurts. Yet when I spun Kruder and Dorfmeister’s remix of Rockers Hi-Fi’s “Going Under (Evil Love And Insanity Dub)” from 1998’s The K&D Sessions (5 LPs, G-Stone Recordings !K7073LP), the Cary dispensed sub-bass frequencies so tangible, I swear I heard thrusting air swoosh by and the precise moment of impact between beater and bass drum head: thump! Drum size was evident.

The Cary also delivered new revelations from Kirsten Flagstad’s 1956 Wagner Recital with the Vienna Philharmonic Orchestra conducted by Hans Knappertsbusch (LP, London 5259). In tandem with the DeVore O/93s, it exposed the beauty of Flagstad’s heavenly instrument, reproduced with intense spatial presence and depth plus fine color and musical nuance. Later, I also played the Flagstad LP via the Cary’s headphone amp and a pair of Master & Dynamic MH40 headphones ($249); the sound’s dimensionality was similar to that of its loudspeaker output.

In my system, the tubed SLI-80HS sounded great with conventional loudspeakers and horns alike, and with all styles of music. It provided an uncluttered pathway to musical satisfaction, LP after LP. The Cary possesses all the qualities tube aficionados seek—and, perhaps due to its solid-state rectification, good if not spectacular grip on low-end fundamentals. Most important—and here’s where it shares more than just wood-finish choices with Klipsch—it’s tremendous fun.