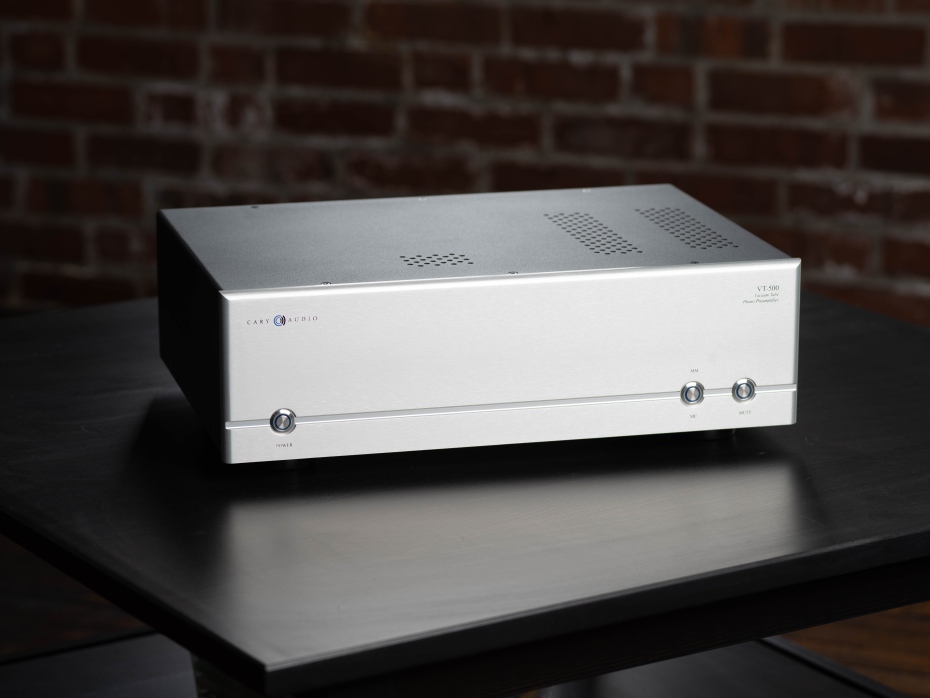 The new Cary Audio VT-500 Phono Preamplifier, based on the venerable 6SL7 tube and the most expensive phono preamp Cary has ever manufactured here in America, takes its place as the most successful phono stage from this 30-year-old company.

Musical and melodious to the max, moving coil cartridges are treated to powerful amplification with ultra-low noise and unhearable distortion. My more expensive references are no more flexible or quiet than Cary Audio VT-500. 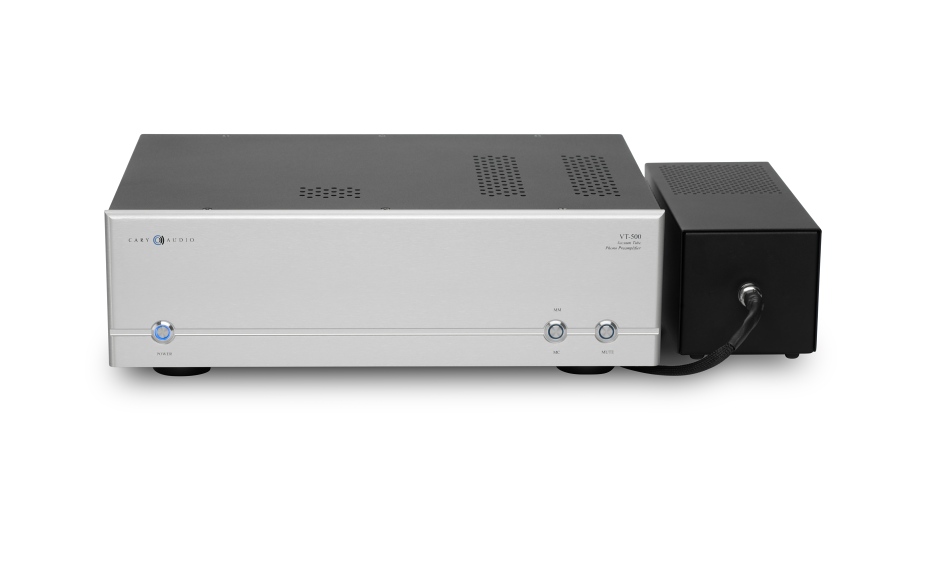 With four tubes and Lundahl transformers (Lundahl Transformers is a world-leading manufacturer of high-performance transformers based in Sweden for audio applications) on board a full-size chassis, the unit ran only very slightly warm to the touch. The beefy power supply with tube rectification was placed on the floor under the cabinet. The modern Tung-Sol tubes selected by Cary Audio are the best currently available and were not microphonic in any way. I saw no need to tube roll, and reviewed the VT-500 with the tubes supplied.

Since the VT-500 is the only phono stage I know of using 6SL7 tubes, some basic background on this amazing 80-year-old tube design, its baptism under fire in WWII, and the inability of the modern 12AX7 and 6DJ8 variants to put it out of business is in order.

Right after Gone with the Wind was released in 1939, RCA brought out an octal (8-pin) double triode called the 6SN7. This tube marks the beginning of all modern double triodes. Double triodes – whether with 9-pin noval sockets or 8-pin octal sockets – begin with the technology of the 6SN7. By 1941, out came the 6SL7, with a much higher µ factor and less current. Both tubes were an instant success, especially in wartime military use on both land and air.

Around 1940, RCA, Sylvania, and Tung-Sol were the largest manufacturers of the 6SN7 and 6SL7 double triodes. Shortly thereafter, Mullard, and soon MOV, brought out their ECC30 series of octal triodes on the UK market. Almost without exception, these could not serve as direct equivalents for the U.S.-made 6SN7. Miniaturization of electronic components continued, resulting in the 9-pin noval-base tubes that appeared in about 1947. These were the ubiquitous 12AT7, 12AU7 and 12AX7 in the U.S. and as the ECC81, ECC82 and ECC83 in Europe. It was cheaper, much smaller and lighter, used less material, and came in greater variations suitable for more uses. The 12AU7 was supposed to serve as a miniaturized 6SN7 and take its place in circuit boards and amplifiers, which it did not do ultimately.

The fact that the 6SN7 was and is considered to be the ideal voltage amplifier ensured that this tube would be produced for a very long time. It was in about 2006 that the U.S. Army finally released their tube supplies and sold off their huge reserve inventories. Among the tubes sold were thousands of 6SN7 and 6SL7 double triodes that had been made in the U.S. during the 1980s. Since the 6SN7 and 6SL7 are still being made today (in Russia, the Balkans, and China), this modern double triode used in tube amplifiers has now been on the market for almost 80 years. Few current tubes have been produced for such a long period of time.

The Achilles heel of the 6-volt 6SL7 tubes is microphonics. Reinforced initially, the tubes were cheapened in post-war production and made more susceptible to vibration. In a phono circuit, this is most unfortunate, and tubes of this variety must be selected very carefully. 6SL7 tubes made in the last 10 years are least microphonic, but have proven less musical and detailed in general. The tap of the eraser end of a pencil on the glass of the tube while in the circuit can identify problem tubes fairly easily. The tubes selected by Cary for the VT-500 show Cary carefully chose a matched set of current production 6SL7 tubes for both their excellent musicality and ultra-low microphonics. 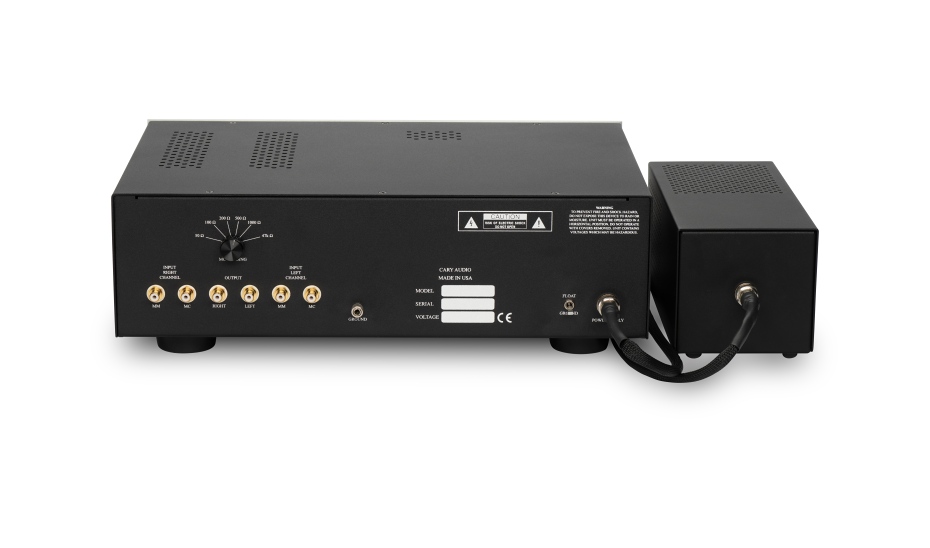 The VT-500 is right at home with .3-.5 mV output moving coil cartridges. With five well-placed impedance choices, selection of the best was easy. You can do everything on the fly, push every button and turn every switch, with nary a pop or even a little click. The switch that floats the ground is very useful and effective. Though it is single ended with RCA connections, it was fully as quiet as balanced operation. The mute button is handy and a jewel. The button switching between the two cartridge types makes for easy silent switching. This is truly an extraordinary circuit design.

Moving coil performance is musical, luxurious, and spacious. Right to left soundstage breadth is truly excellent. Depth and height are well delineated and realistic. Highs are airy and sweet. Bass is deep and powerful. This MC circuit has tons of definition, gain, and slam. The VT-500 appears to me to be optimized for this cartridge type. I cannot envision a low to medium output MC that would not function perfectly in the VT-500.

Recently, some tube stages I’ve heard have started to become too clinical for my taste. I want neutral and real. Tubes naturally give you this in spades, particularly with acoustic instruments, and the VT-500 walks that lovely line between neutral and warm. The Cary unit demonstrates very nearly ideal musical performance and tonality in my book. The use of the 5AR4 tube in the separate fully regulated power supply actually enhances the realism innate in this design based on my many years of experience with tube gear.

With the VT-500, images are well defined and close to my more expensive state of the art references. My top reference LP’s did not disappoint, yielding palpable rock-solid images without etching or smear. Forté passages could not clip or confuse massed instruments or choral passages. Solo vocals kept their composure with a very fine sense of position on stage.

What continually impressed was the voice of the VT-500. It is so very right and real. As I tried to analyze the sound, my notes kept getting shorter and shorter as I became involved in the music itself.

Cary designed 38 dB’s of gain built into the VT-500 for this cartridge type. My high output Ortofon 2M Black with 5 mv output sounded superb. No problems. The medium output Grado Aeon with 1 mV output sounded good but certainly not stellar. The Aeon is best into a 47k load, and while the impedance is not a problem, the VT-500 just does not have the gain to bring the cartridge fully to life. It is almost enough…another 6 dB’s of gain might suffice. Turning up my preamp was not enough to restore the dynamics I generally enjoy with this cartridge.

Regardless of whether you choose a recommended low output MC or high output MM/MI, the VT-500 is stunningly quiet. Once you choose the ground switch position, background noise seems to not exist. I have heard solid state phono stages this quiet, but not tubed designs. I would call the VT-500 a breakthrough design, for sounding like nothing at all. I love quiet, and vinyl reproduction can use all it can get. Bravo Cary!

The VT-500 lacks a mono switch. No other phono stage I know of in this price range lacks one.

The Cary Audio VT-500 Phono Preamplifier is an exceptional phono stage combining the power of tubes, the faithful reproduction of real music in actual space, and extraordinary design, with the lowest background noise in the business. With exclusive single-ended operation, and showing its best with low/medium output MC cartridges, the new Cary Audio VT-500 is fully competitive in performance and flexibility with tube phono stages priced up to $10,000, while costing half that much! Navigating the smartly designed controls is intuitive and a piece of cake, which is refreshing. The mute button on the front panel is a smart touch. It may keep you from destroying a tweeter someday. 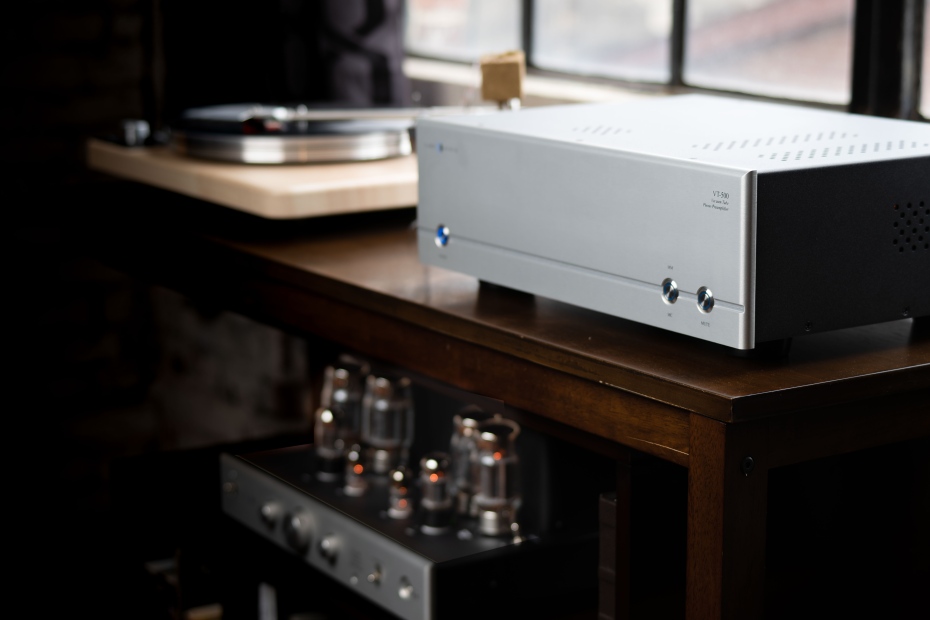